You are here: Home1 / Wine Uncorked2 / A Bottle of Petrus was Aged in Space for One Year

If a bottle of Petrus was aged in space for one year would it taste differently than one on Earth?

This month, researchers at the Institute for Wine and Vine Research in Bordeaux analyzed 320 Merlot and Cabernet Sauvignon grapevines and 12 bottles of wine that returned to Earth in January after travelling aboard the International Space Station for a calendar year.

Until now, the identity of the bottles remained a secret. According to The Associated Press, Space Cargo Unlimited, which is spearheading the experiment, revealed on Wednesday that the bottles are from Château Pétrus — one of the most expensive wine estates in the world. More specifically, bottles of the Bordeaux estate’s 2000 vintage were selected for the mission. At the time of writing, the going rate for one such bottle (that hasn’t been aged in space) is between $6,500 to $7,000.

The experiment is a result of long-term efforts to make plants on Earth more resilient to climate change and disease by exposing them to the stresses of space’s atmosphere and studying the ways in which they adapt. Researchers also hoped to further understand the aging process of wine.

According to Dr. Michael Lebert, a biologist at Friedrich-Alexander-University in Germany, the findings could help scientists discover a way to artificially age fine vintages.

During a blind tasting of the wines in March, 12 connoisseurs appraised samples of the space wines alongside a bottle from the same vintage that was cellar-aged on Earth for a year. Wine expert and Decanter’s Bordeaux taster Jane Anson remarked that the wine from Earth tasted “a little younger than the one that had been to space.” As for the space wine, Anson claimed “the tannins had softened, [and] the side of floral aromatics came out.” She added that perhaps it tasted two to three years older than its counterpart.

Other panelists noted that the wine had flavors akin to burnt orange, cured leather, or a campfire. As a whole, panelists seemed pleased with the extraterrestrial vino.

Why would the wines taste different? Lebert explained that on Earth, the phenomenon of convection mixes oxygen around, resulting in a stable oxygen concentration that affects all chemical reactions, such as oxidation. Ultimately, “oxidizing substances change the taste [of wine],” he said. In space, this convection doesn’t occur.

Oddly enough, the vine snippets in space grew faster than those on Earth, despite environmental challenges like limited light and water supply. While Lebert asserted that this discovery could lead to winemaking in space, Christophe Chateau of the Bordeaux Winemakers’ Council predicts that it will be more than a decade before we see practical applications of this.

Who knows, in a few years, maybe we will all be sipping on wine that has been through a space odyssey. Let’s hope it’s otherworldly. 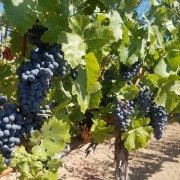