You are here: Home1 / Wine Uncorked2 / Coca-Cola is related to wine?

Yes, Coca-Cola is related to wine. You might even say the world’s favorite cola owes its existence to wine.

In the mid 1800s ”tonic” wines were introduced. In 1863, a Parisian chemist, Angelo Mariani, combined wine with coca, short for cocaethylene (a drug made by mixing cocaine and alcohol – whew!). He sold it under the name “Vin Mariani” and the tonic drink became extremely popular.

Jules Verne, Arthur Conan Doyle, Thomas Edison, and even Queen Victoria were among the millions who indulged in the tonic beverage.  Even the chief rabbi of France is quoted to have said, “Praise be to Mariani’s wine!

Witnessing the commercial success, Dr. John Pemberton of Columbus, George, created his own version. He called it Pemberton’s French Wine Coca, and produced it in Atlanta. In 1885, local temperance legislation forced John Pemberton to produce a non-alcoholic version. He removed the cocaine, pepped it up with caffeine-rich kola nuts,  replaced the wine with non-alcoholic syrup and Coca-Cola was born. 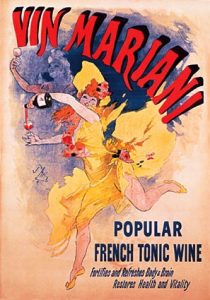 Save The Family Farms
Scroll to top