My wife Meredith and I decided to explore Portugal in late spring, 2021. As we began making plans and interview connections our plans were kicked to the curb as COVID began grabbing all our attention and gathering time. You can relate. A year later, the fog began to lift and the future looked bright. Our flights were still available, the world was slowly opening up so we dived back into our plans to travel in October and November of 2021.

Fortunately for us, Portugal had just begun receiving travelers, however, they could not travel to the U.S. or a few other countries. They were thrilled to see new faces.

As we expected, lodging, restaurants, even car rental, were quite affordable. We wanted to get a real feel for Portugal and the people, so we planned our route with the intent to see as much of the country as we could within 12 days.

If I say so myself, we did an awesome job planning our schedule. We balanced short jaunts and stays in lesser known places with quality exploring time in Lisbon, Pinhão in the Douro River Valley, and Porto, to avoid wearing ourselves out.

And this is how it played out….

We wanted to stay near Lisbon’s older areas of Barrio Alta and Alfama so we chose Hotel Lisboa. It was just off the main corridor, Ave. de Liberdade. A perfect location. The hotel was modern, yet fairly small, yet offered an extensive breakfast. Referring to it as a “continental” breakfast wouldn’t do it justice!  They had a nice bar too, but spending most of our time sightseeing and wine & food tasting we didn’t find a need for it. The hotel clerk offered a car service to pick us up at the airport which was a welcomed option. The local gal shared helpful details during the 20 minute ride.

Just around the corner from the hotel and down a few blocks we found Sr. Lisboa. We were anxious to dive into the local fare. They offered Portuguese versions of Spanish tapas which hit the spot. It was like a country diner with excellent food and the crew made it more enjoyable. 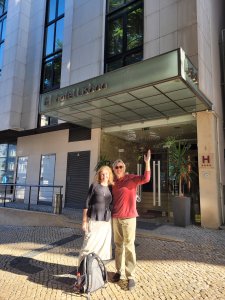 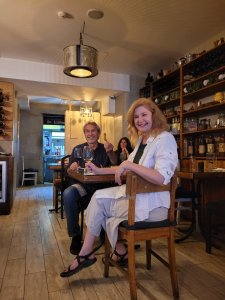 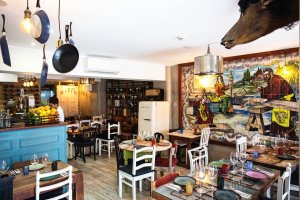 In July of 2021, I was invited to join an international online event sponsored by Wines of Portugal. Rather serendipitous, I thought. It featured the Wines of Portugal Ambassador and interviews with winemakers from various regions, a couple of which made it on to our itinerary. As we ventured through Lisbon we can across the Praça do Comércio, a large square on the coast. On the western row of buildings was the Wines of Portugal tasting room. It featured wines from every Portugese region along three walls of bottles – an unexpected discovery of which we took full advantage! Later, we came across the 2nd location in Porto. 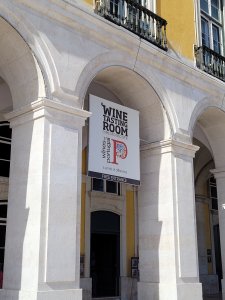 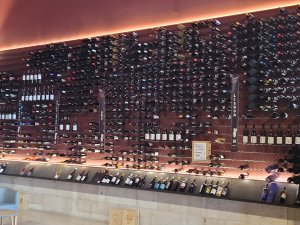 We really enjoyed walking around the Alfama neighborhood, one of Lisbon’s oldest areas, lined with shops, cafes, and convenient historic trams. If you go, try to catch Tram 28, which carries tourists and locals on the most popular route. My sweet tooth couldn’t resist the local pastry, Pastéis de Nata. That with cafe…uhhh! 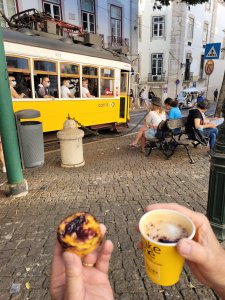 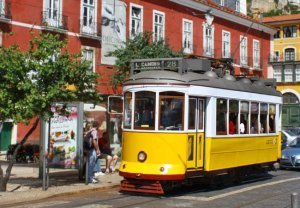 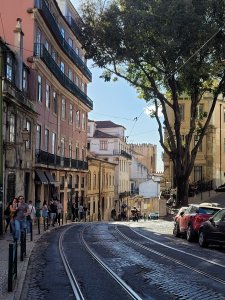 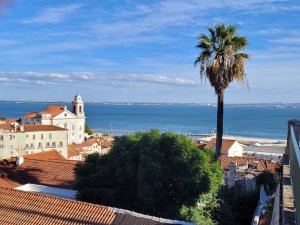 If you go to Lisbon, or any other foreign city for that matter, try to set up a dinner or a tour WithLocals, or something similar. You’ll learn much about the country’s culture and they’re favorite things to do. It’s worthwile insight. They may cook up a dinner you wouldn’t find anywhere else, like Isabel did for us. She offered multiple courses that included fried salted cod balls, fruit and vegetable items, and a local delicacy, black pork. Porco Preto is described by foodies as “how pork is supposed to taste.” The piggies gorge themselves on acorns from cork oak trees, which impart a nutty flavor to the meat. Isabel also provide a selection of cheeses and two wines. She turned us on to Porta da Ravessa white wine, and the red Vila de Frades, both produced in the large Alentejo wine region east of Lisboa and Tejo. Isabel was a delight to spend time with, and her dog was pleasant and chill…sleeping at my feet while we ate. 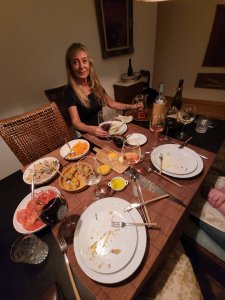 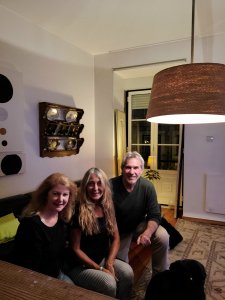 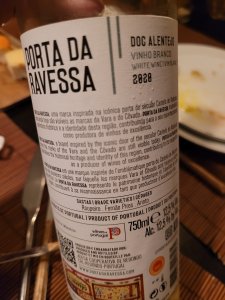 This vinho branco was an ideal starter wine. The blend of Roupeiro, Fernão-Pires, Arinto was light and fresh, and a bargain at 2.49 Euros! 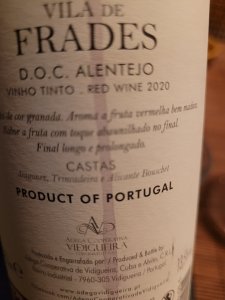 I could create a full post on the day trip we took to Sintra, located on the Portuguese Riviera. A 45 minute train ride drops you into the magical, wonderous mountainous area with magestic castles, royal palaces, historic structures and mansions. And then there’s the Quinta da Regaleira. It’s dazzling archecture and grounds are “condusive  to the contemplation of the Beautiful and the Sublime.” To avoid the tourist groups and lines we chose a zippy way to tour Sintra – the electric Twizy from Go2Sintra Eco Tours. It’s a kick! 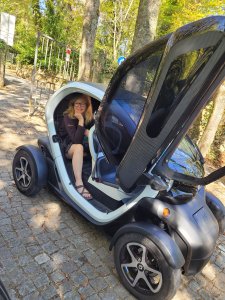 The night before we left Lisbon we searched for a bar or restaurant that had live fado music. It’s the country’s mournful folk music expressing loss, the sea, struggles of the poor and it can nearly bring a tear to one’s eye. Due to the slow recovery of the pandemic there were no live performances in the area. However, luck was on our side. As we wandered and searched, we came across Fado & Wine (the link is to their Facebook page). There was no one in the place but Fado filled the air. Shelves of wine were on every wall. Finally, a young gal came in. She was working across the walkway at her father’s restaurant. He also owned Fado & Wine. After discussion of what we liked in wine, she provided a couple of options. I fell in love with the 2010 São Domingos Garrafeira from the Bairrada region. (Remember that region, it comes up again).  She also served us some tasty tapas, then left us alone to enjoy the music and delectable wine and fare. She returned to let us try other libations she thought we’d enjoy. One of which was Ginja wild cherry liqueur was fantastic! Such long lasting, intense flavor. I wish I made note of  her name. She was sooo cool. 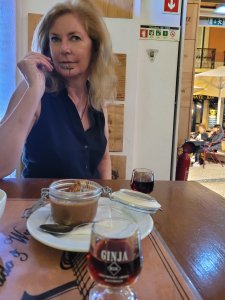 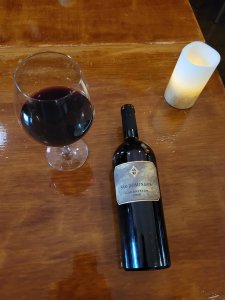 This bold blend of Touriga Nacional, Merlot and Cabnernet featured floral and spicy notes, and blanketed the palate with red and dark fruit, with a touch of toast and spice. Delicious!

After two and a half days in Lisbon, we rented a Peugeot SUV and headed east to the ancient walled city of Évora. It’s also the capital of the Alentejo region. A larger town has since grown around the walled city but the interior has maintained its history. In the city’s historic center stands the ancient Roman Temple of Évora (also called the Temple of Diana). Nearby, whitewashed houses surround the Cathedral of Évora, a massive Gothic structure begun in the 12th century. The Igreja de São Francisco features Gothic and baroque architecture. Not far is the must see skeleton-adorned Chapel of Bones. It’s as fascinating as it is creepy.  All four walls were completed with the bones from the dead of the 17th century. Apparently, the use of the bones guaranteed the absolution of their sins. Those zealous Franciscans! 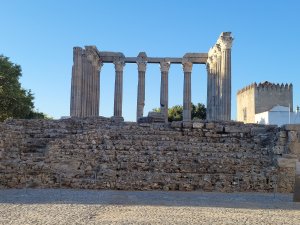 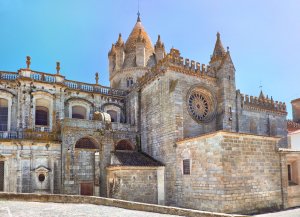 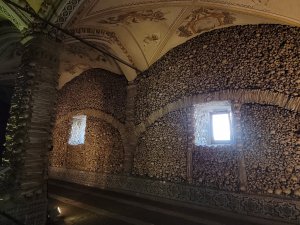 Two surprises: To our delight, just a half block from the Catherdral was the Rota Dos Vinhos-Alentejo (wine route – Alentejo) which offered a good number of wines from the region. Helena poured us a couple of whites and two reds. Grape varieties included Antão Vaz, (that’s a new on on me!), Bical, Grand Noir, and the regions traditional Aragonez, Trincadeira, Alicante Bouschet, and Castelão.

The other surprise where the restaurants in this ancient town. There’s the Michelin Star Origens (which we didn’t choose), and Failo, a three generation restaurant which was suggested to us. It was fantastic. The cod I ordered was the largest I’ve ever seen! (Sorry, no photo). After dinner we decided to walk back to the hotel. It is a small walled-in town, after all, and we spent a day walking around most of it. But a wrong turn, sent us down small streets and alleys which led to a sense that we ventured into an historic maze. Eventually, we crossed a familiar street and were back at the hotel in a short amount of time. I tell you this because we weren’t concerned for our safety. Our unexpected adventure was calm and quiet. It was a beautiful evening.

You know how sometimes you see a photo and you say to yourself, I would love to see that in person? That’s how I felt when I saw this photo of the University of Coimbra. It’s among the oldest universities in continuous operation in the world! At night, it’s stunning.

Fortunately, we found a hotel with a rooftop terrace, and lucky enough to have a room with a window facing the university. It was always in view. The University was established in 1290, moved locations a few times and in 1597 it ended up in Coimbra at the Alcaçova Palace, previously owned by the Royal Family.