Where was the first successful American winery located? The answer is Cincinnati, Ohio.

In the mid-1830s, Nicholas Longworth planted a vineyard of Catawba on the Mount Adams hillside and began making a sparkling wine from the grapes using the traditional method used in Champagne.

From the 1830s through the 1850s, Longworth’s still and sparkling Catawba were being distributed from California to Europe where it received numerous press accolades. In the 1850s, a journalist from The Illustrated London News noted that the still white Catawba compared favorably to the hock wines of the Rhine and the sparkling Catawba “transcends the Champagnes of France”.

Another who was impressed was the famous Ohio poet Henry Wadsworth Longfellow, who was inspired to write Ode to Catawba Wine, which begins: “Very good in its way/ Is the Verzenay,/ Or the Sillery soft and creamy;/ But Catawba wine/ Has a taste more divine,/ More dulcet, delicious and dreamy.” (source-Wine Spectator)

At it’s peak, Longworth’s winery was producing 100,000 bottles a year with distribution to Europe and across the U.S. Unfortunately, by the 1860s, black rot and downy mildew struck heavily in the Ohio Vineyards. Little by little this prompted many up and coming winemakers to move to the Fingerlakes region in New York, which continues to thrive to this day.

Missouri also had a large wine region in the mid to late 1800s and was second only to California in wine production by the end of the century. 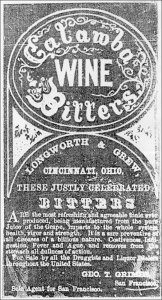