You are here: Home1 / douro river 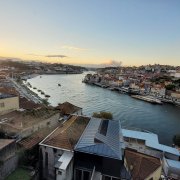 In this Exploring Portugal, Drinking Wine travel blog, we head from the Douro DOC, through the Porto region into Vinho Verde. You’ll hear my interview with Quinta da Aveleda winemaker Fabiano. Click the images to see larger sizes.

As we headed west we encountered another rainy day. It wasn’t much of an issue, and by the time we arrived at Quinta da Aveleda, an umbrella wasn’t needed. The hidden Aveleda estate has been in the Guedes family for 5 generations. I saw an interactive video of Quinta de Aveleda during the Wines of Portugal online seminar, then had the opportunity to try some of the wines during a San Francisco Portugal Wine tasting event. They inspired me to book a tour of the property and taste other brands. Fortunately for us, Aveleda was on the route to Porto. 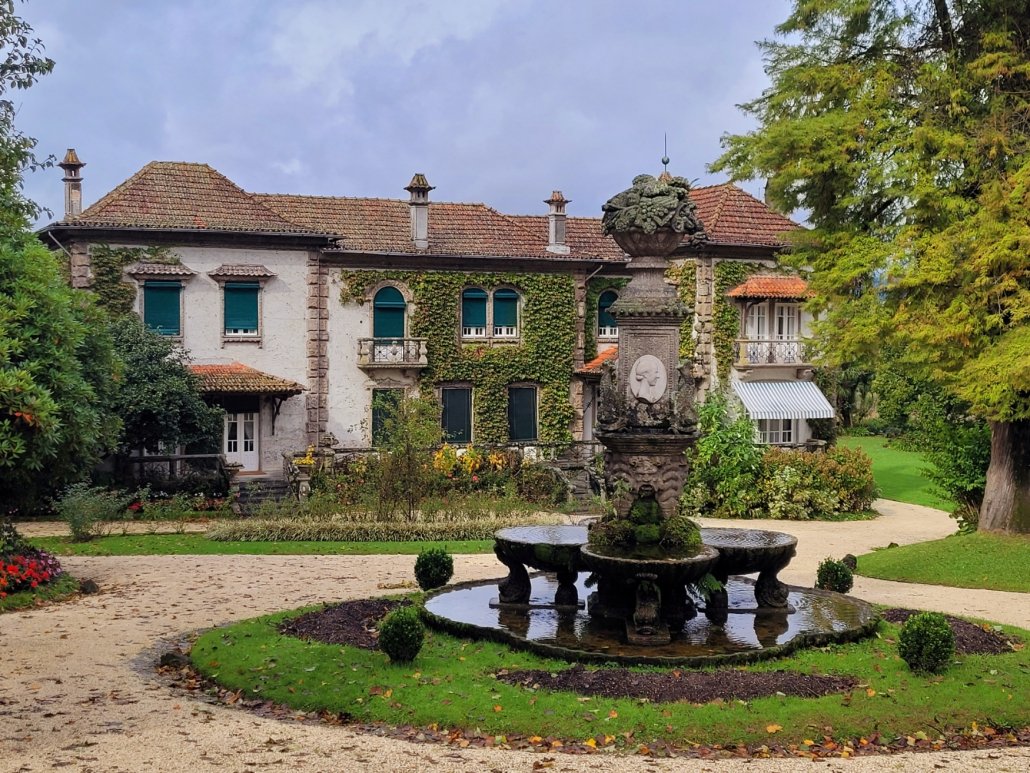 The jardins (gardens) were extreme and magical. They feature a small tree forest that, as I recall, has trees from every region in the world. We saw redwoods from California, palm and maple trees, and many others. The variety of flowers was also abundant. Then we passed by whimsically designed structures, which evoked the sensation of stepping into a fairytale! 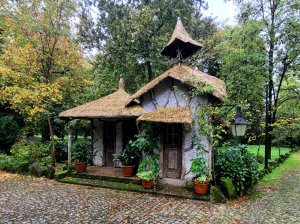 The original guard house from the late 1800s, seemingly from another world. 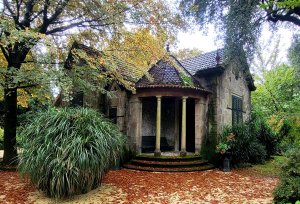 A house built as a wedding gift for a family member 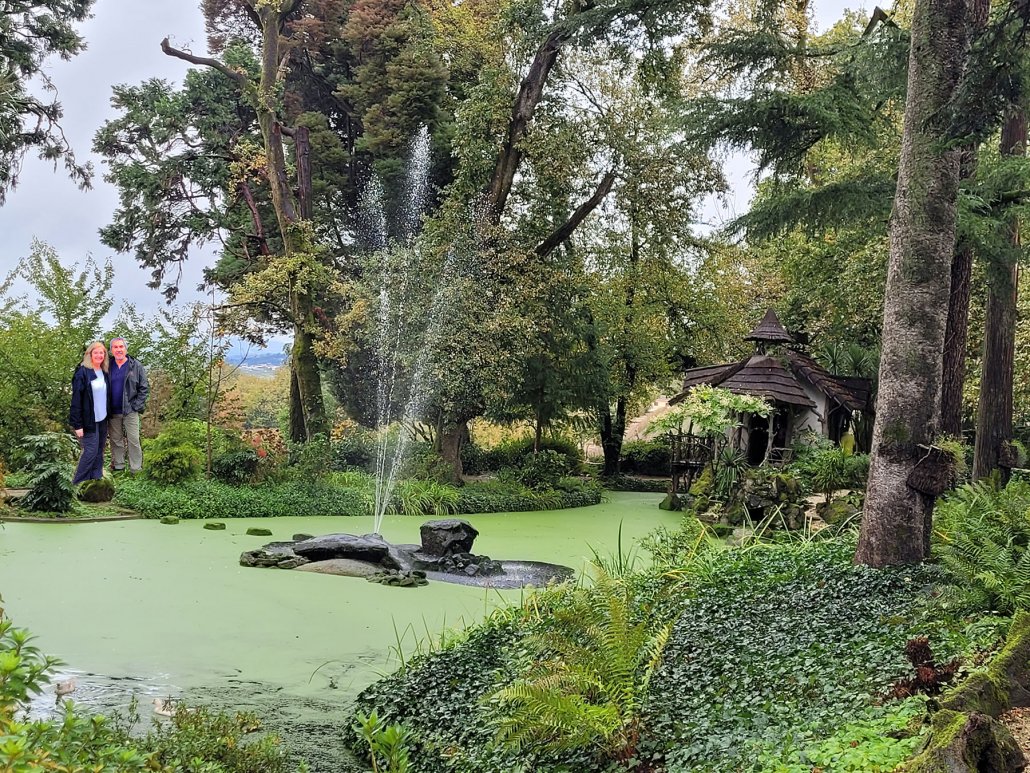 During the tour, which I highly recommend, you’ll also enter the granite wine cellar dating back to 1885. This is where they age the family’s brandy, Adega Velha. The birth of the international brand stems from a well-kept secret older than the winery itself. To read the intriguing story, visit the website Adega Velha. 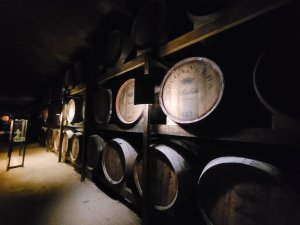 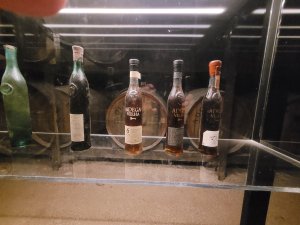 Bottles of brandy from past decades

For the wine tasting, we tried the Solos de Granito, 100% Alvarinho from Vinho Verde. It was a tantalizing blend of citrus and tropical flavors. There was a Moscatel-Galego-Roxo from the Algarve region. It was dry with red fruit and mineral notes. Then the Vale D. Maria from the Douro Superior, further east than Pinhao. It featured grape varieties used in Port wines but was also dry, not sweet. Very good! 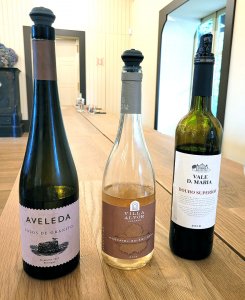 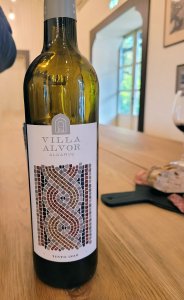 Villa Alvor is another vineyard the family owns in the Algarve region on the country’s southern end. This blend was layered with flavors from grape varieties Aragonez, Trincadeira, Touriga Nacional, and Syrah. It possessed dark fruit qualities, a medium body, and light to medium tannins. It’s an easy-drinking, enjoyable wine, especially for its $3 price tag. Across from the tasting room is a store and gift shop that sells many of the family’s wine brands and brandy. 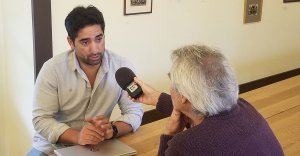 After the tasting, winemaker Fabiano showed up for the interview (I didn’t catch his last name). As you’ll hear, the family sources from vineyards across the country. Click Play to hear our conversation.

Following the tasting, and purchasing some wine, we got back on the wine road toward our next destination.

I’ve felt the desire to see colorful, historic Porto (or Oporto) as I did the Douro Valley. Although, instead of vineyards growing on the hillsides; historic homes, businesses, cafes, and Port houses line the Douro River just east of where it spills into the Atlantic ocean. Iconic bridges, such as the Ponte da Arrábida and Ponte Luís I, connect Porto’s center on the north to the Vila Nova de Gaia municipality to the south. 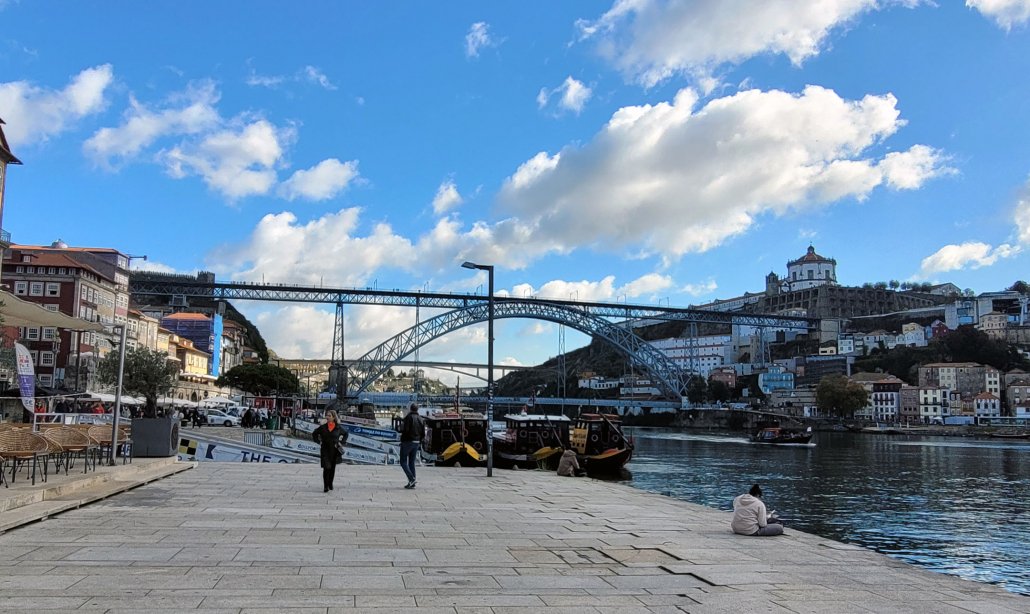 We stayed at the historic, yet modern Porto A.S. 1829 Hotel. The beautiful blue-tiled building was founded in the year of its name as a stationary manufacturer. To this day, it continues to feature elements from its notable past that you’ll see throughout the hotel. The location worked out well for us. One benefit – it sits at the end of the revitalized Rua das Flores, a pedestrian street of merchants, referred to as “the Mecca of Romanticism.” 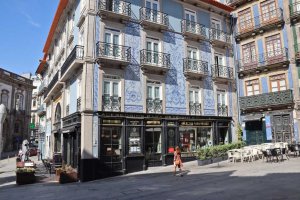 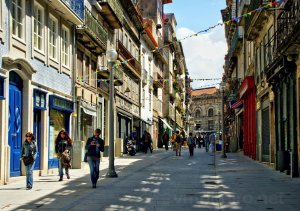 To our surprise, the Porto location of 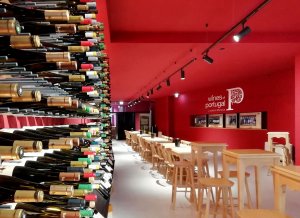 the Wines of Portugal tasting room is located on the Rua.

While we were still in Pinhão we discovered that not only were our new friends Sandra and Patrick traveling to Porto, but they also booked their stay at the 1829 Hotel! How crazy is that coincidence? But it didn’t end there. We ran into them on the streets a couple of times, which led to head shaking and laughs. Hooking up for dinner and meeting at the aerial gondola added to our time together which always included engaging conversation. We have remained in touch since then. 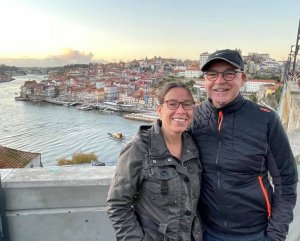 Much of our time was spent in Port Houses and cafes, yet we did find interesting sites throughout the city. A favorite was The Portuguese Centre of Photography, residing in a 200-year-old former prison. The aged concrete walls, iron bar doors and windows make for an artsy architectural design feature, in addition to the photography and the History of Photography exhibition. 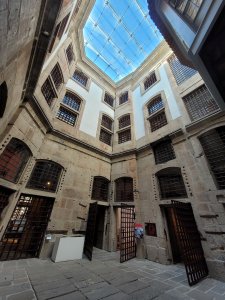 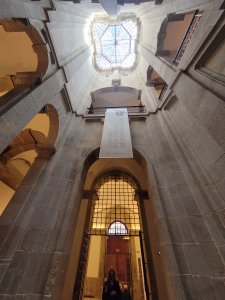 Another impressive attraction we visited was the Church of São Francisco. Finished around 1425, the church features the best example of Gothic architecture in Porto. In the early 18th century, the interior was decorated with exuberant gilt woodwork. Five hundred years later it continues to glow brightly. Whether you’re religious or not, it’s a mesmerizing sight to see. 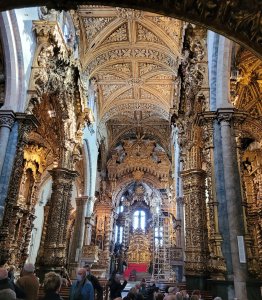 And then there’s the Port wine. I love Port! 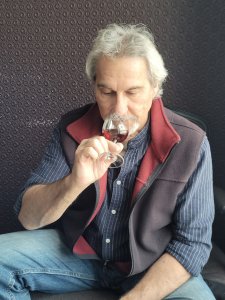 Wine has been exported from Portugal since the mid-12th century. The popularity of sweet, fortified Port took off with the Anglo-Portuguese commercial treaty of 1654 which created new opportunities for English and Scottish merchants living in Portugal. As Sophia Berqvist of Quinta de la Rosa pointed out in Part 1 of Exploring Portugal, Drinking Wine, England has been deeply involved ever since.
However, the German-founded company,
Kopke boasts of being, well, as the building says… 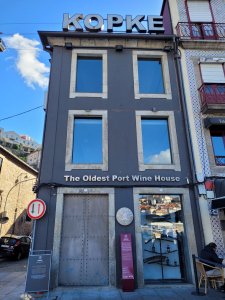 My wife Meredith enjoyed their 2005 White Port so much that she bought one to bring home. The photo of me was taken in Kopke. 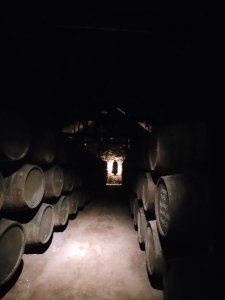 We took a tour of the familiar Port producer Sandeman. As we listened to stories of their history, strolling through the low-lit cellars, the iconic “Don” was omnipresent. It was quite an educational tour followed by a tasting of 4 wines. We were part of a group of people from other countries, which led to interesting conversations.

I have to say, one of my favorite tasting was at Quinta do Noval. It included a 1996 Vintage Porto and 20-year-old Tawny Porto. 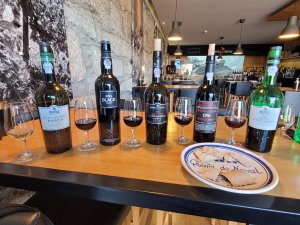 We also visited Taylor Fladgate but didn’t make it to Cockburn’s, Croft, Cálem, Fonseca, Graham’s, or the others. So much Port, so little time!

Small vessels, called Rabelo boats, were used to transport barrels of Port wine and passengers from the Douro wine-growing region all the way downstream to Porto. That method existed until the 1960s, but to pay homage to tradition the Porto houses unfurl their sails during the festivities of St. John’s (São João) on June 24th. The Rabelo Boat Regatta showcase the navigational talents of their crews as about 20 rabelos strive to be the fastest to sail up river to the finish line. As a gesture to their history, you can see the boats daily as they line the river bank of Vila Nova de Gaia. 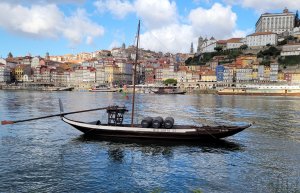 We were across the river to the north for the last couple of hours of daylight on our final day in Porto. It was a surprisingly warm afternoon for November 4th. We wanted to celebrate and heard about the Porto Tonico. It’s young White Port, and tonic water with a lemon slice. It was the ideal refreshing cocktail as we relaxed and reflected on our time along the Douro River. 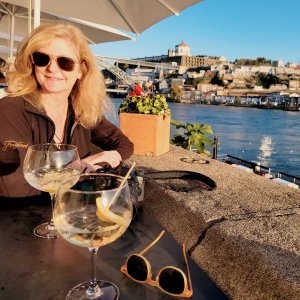 The next day we took the high-speed train Alpha Pendular for the 3-hour trip back to Lisbon for our flight home the following morning. We had a feeling of “a trip well done” as we did about as much as we could have in the 12 days we were in the country. Renting the car allowed us to explore many unexpected, fascinating places. We drove about 800 miles in 10 days and the rental was only 224 Euros. And let it be known, whenever I travel on the wine road, my wine suitcase is always by my side. 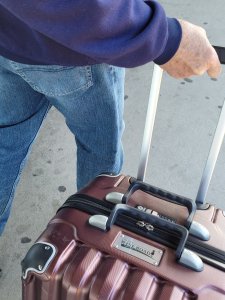 Considering an international trip soon? Portugal was fantastic. The Portuguese are welcoming, most speak English, and the meals were usually more than we could eat. Felicidades!