You are here: Home1 / Le Vagabond 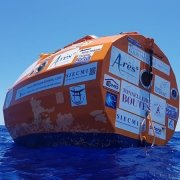 To get to the other coast? He’d be the first to do so? Madness? There could be a number of reasons, but it happened. Which leads me to wonder, why didn’t I hear about the wine barrel boat on the news? This is a major feat!

On May 2, French adventurer Jean-Jacques Savin became the first (known) person to cross the Atlantic without the aid of sail, motor, or human power. His vessel of choice? A giant, three-meter long “wine” barrel.

Savin’s voyage was sponsored by a number of French tonnelleries (coopers, barrel makers), along with other companies. The 72-year-old set off from the Canary Islands on December 26, 2018, and spent 127 days crossing the ocean in his craft Le Vagabond. The 3,125-nautical-mile voyage took slightly longer than expected after strong winds delayed progress as he crossed the west meridian and entered the Carribean.

For the final leg of his journey, Savin was aided by a Dutch oil tanker, which took him to the island of Saint Eustatius. Following two days’ rest, a tug boat then towed him to the shore of the French Carribean island Martinique, where Savin was met by his partner Josyane, and Dr. Pierre Galzot, the man who helped him organize the voyage.

During calm days, Savin passed the time reading, fishing, and playing the mandolin. He also enjoyed the occasional glass of Sauternes.

In January, to celebrate his birthday, the Frenchman savored a special meal that would make many of his compatriots proud: foie gras washed down with a bottle of St. Emilion. Some might argue that Sauternes would have been the better pairing here, but it sounds like a great birthday meal, regardless.

For other images visit The Times.